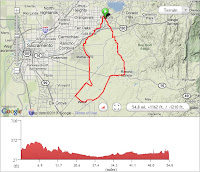 Preview
Route: Where in the world is Wilton?
Meet location: Parking lot across the street from Karen’s Bakery/Bicycles Plus
Leave time: Saturday, 17 July, 8:00 am (Sharp! You’ve been warned)
Distance: about 55 miles
Climbing: None to speak of except a bump north of Rancho Murieta.
Pace: Variable, but we’ll likely average about 18-19 mph. Note the CF Peloton Group will also be doing the same route, but at a little lower average pace.

Ride Report
We found Wilton! This was a great ride with a lot folks turning out. Both the 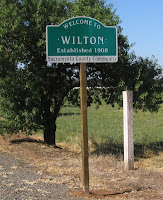 Performance Group and the Peloton Group rolled out of Folsom together. I think this was one of the biggest Cycle Folsom groups I’ve seen for a while, about 20 of us! Once out on Scott Road, a natural selection began to take place and 10 of us were off the front: Oz, Gary, Jeff, Joel, Dave, Jim, Erik, Mr. CSC (sorry, didn’t catch the name), Megan, and myself. We battled a moderate headwind all the way to Wilton, but everyone took their turn at the front keeping the group moving at an even tempo through the rolling open grasslands and oak woodlands. Once we turned onto Stonehouse Road just outside of Rancho Murieta, those of us that knew what was coming up, amassed toward the front. I think it was Gary that jumped first to fly up the short 130 foot rise at 10%. I passed him about half way up, but I heard someone coming up and getting ready to over take me. I thought it was going to be Jeff, but no! It was Oz that took the KOM points.

I’m not sure how everyone else fared behind us on the climb, but just down the road when we turned west onto Jackson Hwy we

were gruppo compacto. Jackson Hwy’s wide shoulder allowed us to double up the pace line and chat a little at 18-19 mph. We headed south again (into the wind) on Dillard and Green roads through hay fields and wine vineyards. It seemed like everyone that could, dug down deep and took a strong pull at the front. With the wind, you certainly didn’t want to loose the wheel in front of you.

Once in Wilton at mile 30, we took a nice nutrition stop at the corner of Wilton and Grant Line

roads. The hard work was behind us; we would be heading back northeast with, more or less, a friendly tailwind! Dave lead us out on Grant Line, taking a monster pull for 3 miles. Then we jumped on the South Canal. Some of us were certainly feeling like they had a little more gas in the tank than others. I’d have to say that Jeff owned the South Canal; probably from his Tuesday night South Canal rides. There were at least 3 little ascents where Jeff hammered off the front putting us all in a world of pain; or at least me. Then on the final stretch of the Canal, while I was sitting second wheel to Jeff, I looked down to see a big 27 mph registered on my computer. I was hurting (and likely everyone else), but there was no way I was going to let his wheel slip away! Once at Hazel and on the bike trail back to Karen’s/Bicycles Plus, we cruised at what now seemed like a mellow 18 mph to the ride finish.