[Posted by Stan Schultz] Phil, Jeff, Kevin, Joel, and Stan met up at Karen’s for a ride down to Sacramento to see the Stage 1 finish of the Tour of California. Don and Kim of Team Juice Plus also joined us. The pace was comfortable out to Nimbus Dam, where we picked up Cesar and Jeff.
As Kevin moved out front, the pace gradually picked up. Then, it seemed, as each rider had something to show as they moved out front to pull. Kim kicked the pace up to 23 mph and pulled several miles before handing it off to husband Don, who wasn’t about to let up. I was behind Don, and next up to pull. As we moved within a few miles of W.B. Pond Park, relief set in. I knew we would make our normal stop there. I wouldn’t have to pull nearly as long or hard as the animals before me.
Mind you, Phil and Jeff had ridden the Davis Double Century the day before, and Joel had ridden a Century with 11,000 feet of climbing, so they were justifiably grumbling in the back of the back. The pace slowed down a touch the rest of the way, but not by much. 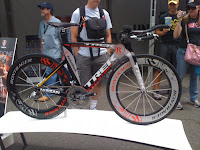 We arrived downtown to a festive atmosphere and plenty of vendor stands to peruse before the finish of the race. A few in the group split up and met up with other friends. We bumped in to Team Van-Hu-Ha (Ron and Lisa), who had ridden the Davis Double the day before and opted to drive to the race and bring a couple of family members along. 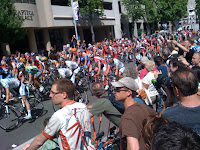 Four of us staked out a good place to see the finish. We found a spot that allowed us to see a Jumbotron for updates. We reveled in the knowledge that we often ride the same roads that the pros were racing on today. It was interesting to have a sense of the grades and challenges the riders faced as we watched them on screen. We stood about 20 feet from a 90° turn on the course and were awed by the tightness of the pack as they sped around it. 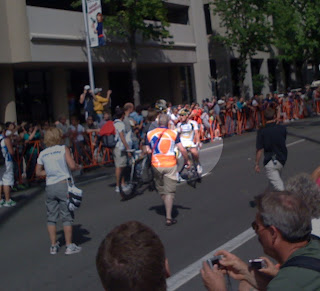 We were about 50 yards past the finish line, which was fantastic because we could watch the finish on the Jumbotron across the street, followed by Mark Cavendish coming to a stop about 15 feet away from us, greeted with hugs by team reps and teammates. Other high profile and well-known pros also cruised by after the finish at a comfortable pace, including George Hincape, who the crowd went wild for.

After it was all over, we picked up our bikes from the free bike parking area, hosted by the Sacramento Area Bicycle Advocates (Note: If you’re not a supporter of SABA, you should be). We agreed that we would tame the pace for the ride home, which meant around 19mph. We all made it home with a healthy appetite, just in time for dinner. For me, that meant a couple of rolls and a beer at Sushi Unlimited. Great ride. Great day. Looking forward to seeing the rest of the race unfold.