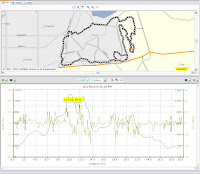 Colleen, Patrick, Phil, and I set out to conquer the local buttes in the regular clockwise direction. We all stayed together until we hit the climb up Ridgeview. Some of the folks short cutted the Montridge climb due to route finding, but Colleen and I did this nasty little climb on the sun baked slope. I don’t know if it was the heat frying my electronics, but I was surprised to see my Garmin 305 record a reading of 15% grade on Montridge. This may have been part of the reason why Colleen ducked out a little early from the ride. But she also said she “was feeling the weekend” (too much riding or too much partying? I’m guessing the former).

We all met up at the park for a nice water stop and then headed south on Sophia giving Colleen a tow to E Natoma where she headed back for the barn. Patrick, Phil, and I did the two loops around Cote de Costco and enjoyed the climbing in the shade; Phil liked it so much that he had to do it in the Big Ring. The three of us kept the pace high (20-26 mph) on the run down Iron Point, then backed off a little to cool down as we returned on the bike trail.