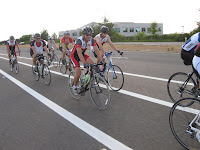 Wow! Ten of us set out to conquer the local cotes: new or returning Cycle Folsom riders John & Brad, Peloton group regulars Joel, Kevin, Bruce, Stan, & Krysta, and Performance group regulars Jeff, Patrick, & myself. The group stayed together on the warm-up along the trail and Iron Point. As expected, the first pass of Carpenter Hill (Cote de Costco) started stringing folks out, and the second pass sealed the split. John was strong over the first two climbs, but had to bail-out on the ride due to time. Jeff, Patrick, Bruce, and I formed a small group off the front and took pulls at 25-30 mph along Empire Ranch/Sophia. Bing Ring Jeff decided to drop us all on Beatty, but Patrick put in a dig to stay with him. I had to drop down Montridge at 45 mph to catch back up to them & Bruce was close behind. I thought I’d take a dig on EDH and try and ride the others off my wheel on the false flat. I think I had a gap for a little ways, but the lights were not my friend. We all swung onto Brittany where I got dropped on the little climb up to the school. From there it seemed that route finding became an issue. I got back to Karen’s first, but I think Bruce & Jeff just rode home. Patrick showed up a few minutes later followed by Krysta. Not too long after that Joel and Kevin rolled in. Unfortunately, Stanley Steamer got a flat at the bottom of Beatty and rolled in a little bit later.