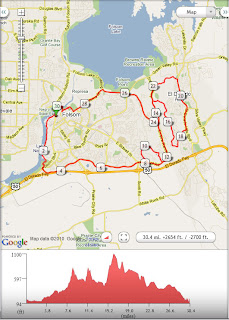 Gary and I knocked out the 2 hour training ride around the foothills of Folsom and El Dorado Hills. The climbing is a touch more difficult in the counterclockwise direction. We conquered the upper slopes of Cote de Costco twice, slogged up the steep pitch of Beatty berg, and wallowed over Wilson. We were hoping for a south tailwind on the flats of Empire Ranch and EDH Blvd, but ended up battling a western crosswind, only to turn into a head wind on the way back to the barn. All in all, it was a great training ride. Stats: 29.9 miles, 1:50 time, 16.5 mph average, about 2,200 ft climbing.