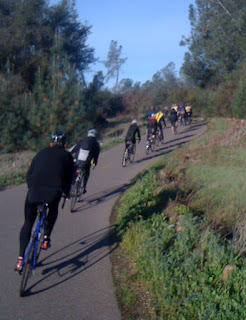 For today’s ride, Cycle Folsom’s Peloton Group, Performance Group, and even a couple riders from the Endurance Group met at Karen’s Bakery at 8am for a ride to Discovery Park in Sacramento. I never got an accurate count, but I think we had between 17 to 20 riders at the start. It was a beautiful day, just a bit cold when we started, but manageable.

Prior to the ride start, Steve informed the collective group that the ride would likely split apart along the way, with the Performance Group pulling ahead and the Peloton Group holding a slower pace behind.It was an accurate prediction. Knowing that we had a total of about 60 miles to ride, several Peloton Riders dropped the 24 to 25mph pace down to a more reasonable 17 to 20mph. 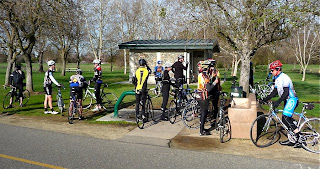 We arrived at the first rest stop, William B. Pond Park, to see the Performance Group. As they prepared to take off again, a few cyclists who had accomplished their goal of keeping up with the faster pace until they reached the first rest stop decided to hold back to join the Peloton Group for the balance of the ride. We averaged a steady 18 to 19mph the rest of the way to Discovery Park. At Discovery Park, it happened again… we picked up a few more riders who had been riding with the Performance Group, but who were now willing to drop their pace a bit to ride with us.

Somewhere along our ride out to Discovery, we picked up a cyclist who had been riding on his own, but latched on to the Group’s wheel as he saw us ride by. Turns out, he’s a very well-conditioned triathlete on a race team—a Machine. As we departed Discovery Park, he ended up out front. Aside from a few miles here and there, he pulled the group pretty much all the way back to Folsom. Having someone pull that long is a bit of a blessing and a curse. While it’s nice to benefit from a draft all the way home, part of our conditioning requires that each of us take turns “pulling” to help build our respective strength. Nevertheless, today, I was quite content to simply reap the “blessing” of The Machine’s willingness to keep pulling.

On the way back, the testosterone seemed to slowly start to flow again. The pace slowly inched its way up to a range of between 22 to 24mph. With such a big group and so much traffic on the trail, alertness, use of signals, and verbal call-outs become so very important. Fortunately, every one seemed to be aware and alert of the safety issues.

Eventually, the Group split into two again on the way back, although I have to confess I’m not sure where. Six of us reached the Hazel Bridge and realized we were on our own and had dropped a number of riders. We continued on, feeling a bit guilty, but also knowing that everyone was quite capable of making their way back. As we neared the ride start at the Folsom Bridge, five of us added an optional up-and-back to Beale’s Point for good measure. The Machine—who was still with us and happy to pull—didn’t disappoint on the slow, steady grade up to Beale’s. Chuck and Joel attempted to sneak an attack ay the top of the hill in to show The Machine that they still has somethin’ in them, but a couple of quick clicks of The Machine’s gears and a huge burst of energy from those quads of his kept them in check. Meanwhile, Stan was gasping for air at least 100 to 200 yards back.

All in all, quite a ride. Definitely the biggest Cycle Folsom Group ride I’ve ever been part of. We had a few new riders with us, as well as a relatively new rider. I’m hopeful they enjoyed it as well. They looked great during the ride.