I’m guessing that most riders took a pass on today’s scheduled route due to forecasted rain. Stan Schultz and Joel Brandt showed up based on reports of just 30% chance of rain for most of the morning. It turned out that we made the right call. With the exception of mild to moderate headwinds in a few spots, it was a great day for a ride. We rode to Hagen Park & back, followed by a run around the Mt. Costco Loop, which includes Costco Hill, Beatty Hill, and Beales Point. We also ended up tacking on a loop around Lake Natoma for good measure.

We held a moderate pace out to Hagen Park and back, anticipating that we would struggle a bit on Costco Hill, Beatty Hill, and Beales. I’m happy to report that Joel and I both held a respectable pace up Mt. Costco. It was gratifying to catch and pass two riders on the way up the hill who had passed us quite a bit earlier on the trail. We both speculated that they probably had stopped at Costco for a hot dog, which didn’t provide optimum energy. We were pleased with how quickly we recovered as we made our way over the top and on to Beatty Hill. 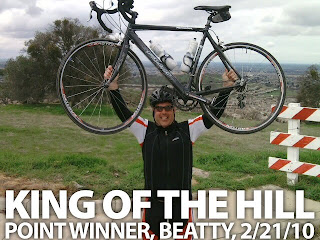 Beatty presented a bit more of a challenge, but we finished strong—challenging one and other to the top. Joel ultimately claimed “King of the Hill” points victory for the day by about 2.5 feet. I snapped off a quick photo to catch him in his glory at the top. We’re always careful to hold our “official” King of the Hill challenges when it’s just the two of us, so at least one of us can win!

After continuing on to Beale’s Point, we both agreed that we had enough time and energy for a loop around Lake Natoma to cap off the ride at just over 55 miles.

It started sprinkling very lightly at the end of the ride as I neared Coffee Republic for lunch on the way home. My little iPhone app from The Weather Channel seemed to be right on the money today.

For future rides, feel follow “CycleFolsomPelo” on Twitter for ride status updates. We usually ride if light rain or sprinkles are expected. We’ll bail if showers or high winds are expected.

Next Week’s Ride: Discovery Park and back via the American River Trail.