There were all kinds of reasons not to race Snelling: the weather (cold rain & snow predicted earlier), flooding (last year the course was flooded), my fatigued legs, and my recent cold. The weather was cool, but not wet. There wasn’t any flooding, and I wasn’t as sick as I was a week or 2 ago. But my legs did feel dead, but that’s racing, right? I lined up with everyone else for the Masters 35+ Category 5 race; myself (Brian, Folsom Bike) along with Jeremy and Jeff, both Cycle Folsom notables and racing for Bicycles Plus. Turns out Miles is racing for Team Revolutions; today was the first time I’ve seen him since he had a little spill on a wet road back in November. The first of four, 12 mile laps, was very tame with the peloton moving around 18-20 mph. I pre-rode the course a week earlier and knew some of the corners were tricky and possibly had sand on them. I went to the front for the first set of 15 mph chicanes to pick a clean line. It wasn’t my intention to be off the front, but everyone else was content riding slow. The peloton was one compact group rolling through the finish after the first lap. On the 2nd lap, a DBC rider went off the front, but no one was willing to chase him down. Jeff made a little effort over one of the small climbs and I followed his wheel. Without much effort we had a gap. We ended up catching the DBC 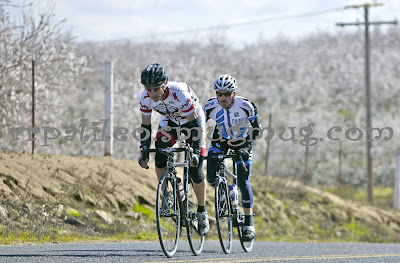 rider and briefly had a 3 man break. I was feeling the fatigue in my legs and every time the DBC guy pulled through, I was at my limit. I didn’t want to blow myself up on the 2nd lap, so decided to drift back to the peloton. A few seconds later, Jeremy comes cruising up with another guy with some distance off the front of the peloton. I tried jumping on their wheels, but again, I was at my limit. This ended up being the winning move. On the first time check the 4-man break had 50 seconds. On the 3rd lap I tried to get the guys at the front of the peloton organized in a rotating pace line to chase them down, but after two rotations it fell apart. Both Body Concepts and Peninsula Velo had 4 or more guys (none in the break), but neither team could get organized. By the end of the 3rd lap the break had 2 minutes; everyone else was racing for 5th. On the 3rd lap the peloton had a crash on the back side of the course. On the 4th lap, a pro woman Tibco rider in a solo breakaway passed my Cat 5 peloton [Later I read that it was Erinne Willock and she soloed the win]. We were slow. She looked like she weighed 90 pounds, but was riding faster than us into a headwind. Eventually the Cat 5 peloton would get passed by the Pro Women’s peloton, but this was right before the fast part of the course and we were literally right on their heels. Just before heading into the corner before the bumpy road, the same corner other guys in our group crashed, the Pro Men’s peloton raced up the side of us. Great, 150 cyclists all going into the same tricky corner. Relief, no one crashed. But then my Cat 5 group got neutralized to create a gap behind the woman’s group because the finish was about 3 miles away. Because we were neutralized, everyone moved up to the front and were then able to recover, and this was right before the finish. Sure enough, with about a mile to go including one corner and a small hill, we were set loose. Guys nearly started sprinting from a mile out. The pace shot up to 28 mph. I stayed near the front in the top ten, but there was no way I was going to take any wind at that speed from that far out. I picked a good line through the final right-hand turn and kept my speed. A guy in front of me went way wide which was fine, but then he cut back across the course. I literally had to grab a handful of brake, fishtailing my back wheel like a power slide, but was able to quickly recover and get back into a sprint. I was gassed, but kept pushing to the end up the hill. There was a Rio Strada guy in front of me, so it was my final goal to sprint ahead of him. The official results were not in when I wrote this, but I counted about 7 guys in front of me, plus the break away of 4, so that would put me somewhere between 10-15. Not bad considering my legs were cramping over the small climbs on the last lap and a half. Miles also had a strong finish just a few places behind me. Jeremy went on to take first with a solo break from his break-mates; Jeff would then sprint from the 3 man chase group for second. Way to go guys! 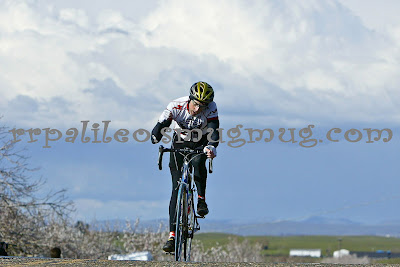 El Patron raced the Masters 35+ Category 4 race which was on the course at the same time as my race. Apparently he got in a 2 man breakaway and finished second. Thanks Krysta for taking the great photos!

Chad and Patrick also raced. You can read about their events in the Cycle Folsom Meetup discussions. 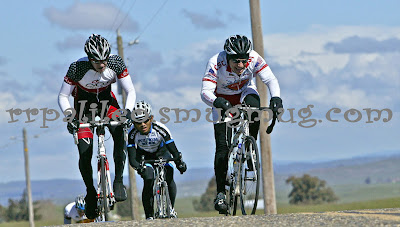