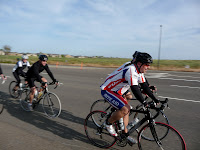 Seven Peloton Group riders started out on what was a new route for most  us. It was slightly chilly at the start, but warmed up nicely. Lisa Haas designed this route based on past experience, and some additional guidance from Steve Ward to help avoid some traffic and increase safety. We soon found out that Steve’s recommendations typically involve a hill or two.

We rode out to Latrobe Road and then onto Cothrin Ranch Rd. I’ll blame it on the beautiful scenery, but we all missed a turn that would have kept us on Conthrin Ranch Rd. The result was a pretty tough climb to the ridge. I’ve since heard reports that the grades throughout that area were 14-15% and up to 18%. We re-grouped at the top and got our bearings with a trusty Google Maps app. Soon we were back on track, heading toward French Creek Road. 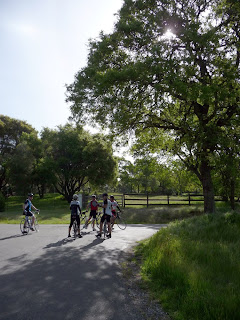 It seemed that everything was awash in the emerald green that only Spring can bring. Trees overarched the road; their shade kept slight chill on our skin. A small farm-raised dog threatened to tear us all limb-from-limb as it scampered back and forth behind the wire fence, barking ferociously as we passed. As we finished up Old French Town Road, Lisa, Ron, Ryan, and Brian took a bypass to Green Valley Rd., while Joel, Kevin and Stan continued up Motherload Rd. to Missouri Flat. Both groups agreed to meet up again at the Rescue Fire Station, but the latter group had a few more miles to cover and a couple of hills. After a quick stop for water at Safeway, Kevin, Joel and Stan were on a mission to get to the Rescue Fire Dept. Thinking that the others might move on without them, they arrived at the fire station to see Lisa and Ron returning from pizza joint across the street, holding a big ol’ ham sandwich with all the fixings—and freshly fried potato chips!

After the “nutrition” break, we made our way back on Deer Valley Road and back out to Green Valley. From that point, we usually would take Green Valley all the way home, but Lisa plotted the route to return via Malcom Dixon Road. It was a pleasant surprise. We’ve gone out on Malcom Dixon the other way several times, but never experienced the road in the other direction. I think I liked it better. This hills go mostly down in that direction, not up.

In the end, we covered just over 58 miles with just under 4500 feet of climbing, all in about 3 hours and 51 minutes. The ride definitely worked up our appetites—perhaps prompted by the ham sandwich at Rescue. A separate Facebook post by Kevin revealed that he stopped for an In-and-Out Double Cheeseburger and a Shake on the way home. Well-deserved.

Thanks to again to Ron for the photos. Visit Ron and Lisa’s “Team Van-HuHa” blog for more photos and additional commentary on the ride.