Skip to content
We had a good turn out yesterday for our CycleFolsom Peloton Group Ride considering the wind and the heat. There were six of us trying out the new Cameron Park Loop introduced by Joel. This incorporates some of the Rescue Route and part of the Tuesday Evening climbing workout in El Dorado Hills.
http://ridewithgps.com/routes/34266
We had the pleasure of riding with Jessica who joined us for the first time. Jessica is a second year student at Berkeley and visiting Folsom for a couple of weeks while on break before heading back for summer school. She’s only been riding since November and yet did a great job keeping up with the boyz. Course, she’s only half our age and also does Triathlons so it’s not like were real fast or strong!
As usual the group started out from Karen’s where we deviated just a bit from the posted route by heading out across the trail and up to Folsom Lake Crossing. From there were riding the Rescue Route which follows East Natoma St, Green Valley Rd, Malcolm Dixon Rd back onto Green Valley to Deer Valley Rd then right onto Starbuck Rd. Starbuck starts with a small climb which can lead you to think, “come on not more climbing” but its short and for the most part you enjoy a nice downhill ride to Green Valley Rd. Good thing because it was starting to heat up but thankfully the wind really wasn’t a factor, yet!
We quickly regrouped at the bottom before continuing onto Cambridge Rd and then a right onto Country Club Drive. This takes you through Cameron Park with a few rollers and fairly quiet roads light on traffic. Turning right onto Bass Lake Road exposed us to the wind and much more traffic but all in all it really wasn’t as bad as I had anticipated. Turning left onto Serrano Parkway I mentioned to Bruce that the wind was not nearly as bad as I thought it was going to be which was a good thing because most of us were running low on water and needed to fill up before tackling the infamous Willson Blvd and the steep climbs up to Beatty Drive.
The old El Dorado Hills Golf Course proved to be the perfect stop to refill and take a short break. Played many a not so serious golf games there (by which I mean playing with friends, drinking a few beers along the course and really not keeping score). Its a shame to see it in such bad shape now!
Once everyone had refilled and taken in some shade, we continued out to El Dorado Hills Blvd and then left onto dreaded Willson Blvd. Now this starts out not too bad but as soon as you wind left it quickly steepens and you know your in for some work. And its not done just because you reach the top, no after turning right onto Ridgeview Dr and then onto Knollridge your reminded that you gotta work for that fast ride back down Beatty Drive.
We regrouped again on Katie Way where Tim took a quick picture of the group. Thanks Tim for the pic, from left to right is: Kevin, Chuck, Joel, Bruce and Jessica on Katie St, El Dorado Hills about to head down the infamous Beatty Drive… 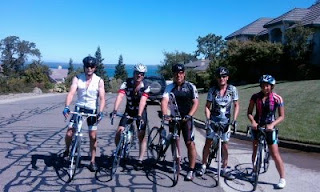 After a fast ride down we turned left onto Alexandra and then onto Sophia Pkwy where we formed a loose pace line again fighting some good wind. Sophia turns into Empire Ranch Rd which we followed right onto Iron Point Rd which climbs up to the top of “Costco Hill”. At this point the group broke up a bit and we lost Jessica on the last climb up. Tim, Bruce and Scott headed on down and I waited up for Joel and Jessica. She’s new to the area and I didn’t what her felling lost and left behind on her first ride out with the group. Sometimes being a ride leader or co-leader does not mean your always in front, it means looking out for everyone and making sure you stay together as a group. The last thing you want to leave new riders with is a feeling that everyone just left you behind on a route they’ve never ridden. At the same time you don’t want to hold anyone else back from achieving their training goals for the day.
At the bottom of Iron Point, Tim, Bruce and Scott were waiting for the rest of us and we continued down to Folsom Blvd and across to the trail. At this point everyone knew the way back and you could see the pace really starting to pick up. It seems natural on the last couple of miles on the trail to start challenging yourself and others at this point with the small rollers and fast curves. But you really got to keep you head because the trail gets very crowded this time of year and you don’t want to come rolling around a corner and take out a jogger or family out for a nice Saturday ride – bad form and reflects poorly on CycleFolsom.
With just over 43 miles which the group did in 2:51 for an average of 15.1 mph, this routes a keeper. It’s got something for everyone, challenging climbs but not gut busters, rollers for recovery and rewarding descents!