(Preemptive Disclosure: use of the term attack, and fast pace is relative. Look at the four of us and I think you’ll know what I mean)

A few of us exchanged e-mails and set up a “slow and steady” midweek ride today, beginning at 3:30pm from Karen’s. The route included Mt. Costco, Beatty Hill, over to Serano/Silva Valley, out to Green Valley, E. Natoma, and a run up to Beales Pt. before returning to Karen’s.

Kevin and Joel got a jump on Costco and held a pretty good pace, but Stan landed a surprise attack on both of them to grab the sprint points. No one cried foul—but they could have considering that Stan was the one who first suggested that “we should take the ride slow and steady.” 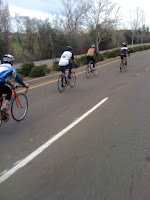 We all made it over to Beatty Hill where we met up with one of the Performance Group Ride Leaders, Ozero Lee. Oz is one of the Grandfathers of the Peloton Group, having led the Group for more than a year. He’s a great mentor in the hills, however, Stan intends to inspect Oz’s bike very closely next time he rides with him. He’s confident Oz has an electric motor or two hidden in there somewhere. Oz makes those hills look waaaaaay to easy.It’s amazing. Joel kept up with him though, leaving everyone else behind, especially Stan, who was in the waaaaayyyyy back cursing and muttering “Yeah? I beat you all on Costco though!”

We all made it up Serano/Silva in good shape, after which the pace picked up. Kevin surprised us all—throughout the ride—with a pretty brisk pace. But the real dark horse of the ride was Rob, who saved plenty of gas to grab the sprint points at the top Beales Pt., and then again on the way down to Karen’s.

Slow and steady. Pfft! Not today.