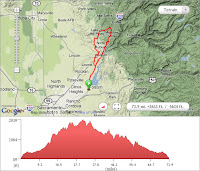 Preview
Route: Magnolia Road (Nevada County) from Folsom
Meet location: Parking lot across the street from Karen’s Bakery/Bicycles Plus
Leave time: Saturday, 24 July, 7:30 am (Sharp! You’ve been warned)
Distance: about 74 miles
Climbing: About 5,500 to 6,500 elevation gain; mostly rolling hills.
Pace: Variable, but we’ll likely average about 17-19 mph. It really depends on who shows up and does the pulling.
Past Cycle Folsom ride report

The Performance Group had around 8-10 riders at the start. Gary, Dave, Frank B (Hammerin Wheels), Scott, CycleFolsom guru Steve, myself (Phil), and a few new riders (sorry guys for not remembering all your names). We started off on-time heading up Auburn-Folsom Road. I lead out for a mile or so taking it slightly slower than normal pace not knowing the fitness level of the new riders in the group. Steve and Scott came to the front and picked up the pace slowly over the next couple of miles… and then put the hammer down. The group stayed together with three of us trading pulls until the main climb up to Auburn. Steve made a move off the front and drew out one of the new riders who put in a good effort to break off the front. Shortly after, Steve started to chase. Scott, myself and another rider traded pulls up the climb into Auburn. Steve took the KOM on this climb. Scott dropped off to head home (some kind of excuse, like make breakfast for the kids). We rode our way through Auburn where Steve showed us a route with less traffic, including riding through a school. Steve was keeping the pace high on the climbs. A few riders commented on how beautiful this route was. We had good shade on most climbs and the descents were long enough to recover before the next climb. During one long descent, Steve and I made a breakaway and worked together to put time on a four man chase group. We held them off all the way to Hwy 49. The new riders were great climbers staying up at the front on most of the climbs (great job!). The run down Auburn-Folsom was at a decent pace. We pulled up to a few other groups of riders at Douglas. You know what happens next… it was on to pass them and get lined up for the last sprint. The pace was high and there were only four of us left for the sprint. I was pulling up the last slight incline and decided to drop off and rest for a few hundred yards. I knew Steve was marking everyone and waiting to see who would make the first move. One of the new riders asked me if there was a final sprint just as I decided to go at the 200 meter mark. I got in a good dig and held Steve off until the last 25 meters where Steve clicked down a gear and moved passed for the win! After the sprint we soft pedaled into Karen’s.
Notes: Gary went down hard descending a hill at 45 mph on his bike about a month ago and is back improving every week. Steve had his bicycles stolen and was testing his fitness level with the performance group on a brand new Specialized Tarmac SL3. Steve won all the jerseys today!