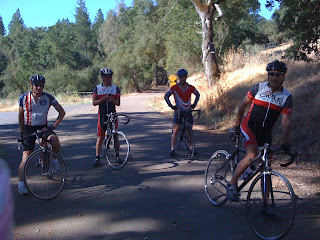 Ride Stats from my Garmin:
69.7 miles in 5 hours ride time.
7,783 feet of climbing (We cut out Folsom Crossing Bridge, started the ride with Steve Ward’s group up to Salmon Falls Road)
Avg speed (15.3)
This morning was a little brisk on my warmup ride from home to the meetup. At the start of the ride there was just three of us, Jeff, Doug and myself. We decided to ride with Steve’s group up to Salmon Falls Road where we would turn left while Steve and group would continue on towards Georgetown. Tom joined us at Salmon Falls Road. I was happy to see Tom as we would have another rider to share pulls with. At Zee Estates we picked up Oz who had been waiting for around 5 minutes. Now the group was five strong riders. I rode off the front on the descent to the start of the climb to the Rhino. Steve Ward told Jeff this morning a good time would be around 17 minutes to the Rhino. As typical with the performance group the challenge was on once we crossed Salmon Falls Bridge. It did not take two pedal strokes for Big Chain Ring Jeff to move off the the front of the group with Tom, Doug, OZ and I chasing. For a short while I was solo chasing down Doug, Tom and OZ. I made an effort on a flatter section of the climb to overtake and pass them. They grabbed my wheel and we traded pulls until the last section of road up to the Rhino. We could see Jeff in the distance and I wanted to try to close the gap on this last stretch of road. I took off and heard Oz say “I’m done”. I ran out of road trying for the catch…..Jeff completed the climb with a time somewhere in the mid 18 minute range to earn the KOM on this climb. Great climb Jeff! I came in behind Jeff at 19:24. We made our way through Rhino Estates, a rolling road with a few short climbs to get us onto the road that winds down to Rattlesnake Bar road. 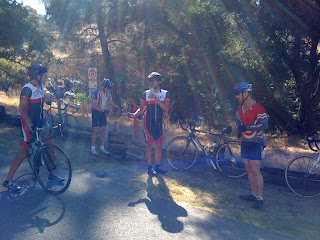 Picture at right, Water stop at the end of Rattlesnake Bar road.
After the effort put out on Salmon falls Road, the climbs on Rattlesnake Bar road were at a slightly slower pace with everyone staying in a group during the climbs. Tom was doing alot of the pacing (great job Tom) on each climb. As Tom says….he wanted to keep the climbing pace reasonable. We briefly stopped at Pilot Hill for a nature break. Oz decided to return home via Salmon Falls road. 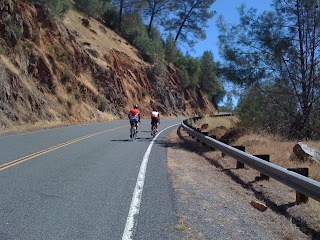 Oz, you rode strong today!
Picture at right: Forrest Hill Climb.
We rode hwy 49 with Tom putting in a monster pull to Cool for a brief water stop before continuing on hwy 49 to drop into the confluence. I made a furious descent to make the right onto Old Forrest Hill Road with a small lead on the group. I stopped to take a picture of them climbing but did not get the iphone out quick enough. So you are seeing what I saw….the backside of the group spinning away from me up this climb. Big Chain Ring Jeff made another break from Tom and Doug. We topped the last climb on Forrest Hill and made our way through Auburn to the last water stop at Madiu Market. From there I pulled to the first descent and bombed it using a Harley rider for a moto pacer. Jeff moved to the front and put in an enormous pull to get the peloton moving at a fast pace. We all traded pulls down Auburn Folsom with Doug doing a fine pull from Douglas until Tom turned off at Beals Point to make his way home. Jeff turned right at Oak Parkway to head home. Doug and I rode into Karen’s together. Everyone in the group rode strong today. Great job all!