Skip to content
[by Kevin Harris] The Performance and Peloton Groups rode together today out to Discovery Park and back for a Long Slow Distance ride. But it didn’t end up that way!
We had a good turnout today for our combined Group Ride, plus two new riders came out for a new “Grupetto” ride around Lake Natoma, led by Stan. Good to see new riders out. All three groups started out from Karen’s this morning for what promised to be very enjoyable ride. The weather was great.
The Grupetto Group dropped back pretty quickly, but the Peloton and Performance Groups pretty much stayed together. As we reached William B. Pond for our first scheduled stop, we collectively made a quick decision to skip the stop and push onto Discovery Park. However, once the group got to about Sacramento State, Phil called out “flat” and several of us stopped to help out. This naturally broke the group into two. Tuned out it was Ryan with the flat, and the first of what would be two for him for the day! Once that was taken care of, Phil discovered he had a slow leak himself and decided to go ahead and change out the tube just to be safe. By the time we got going again we knew the others would be far ahead so we pushed the pace a bit to make up the lost time.
Just as we got to the outer edge of Discovery Park, the first group was coming the other way. They decided to turn around and return with us back to the water stop at Discovery Park for a regroup. 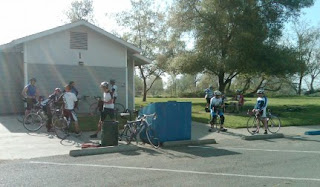 We were pleasantly surprised to see Kirk Stanfield, one of our Peloton riders from last year who we haven’t seen out for several weeks due to an old knee injury. Turns out he had left Karen’s not long after the combined group had departed and just beat us there by only a couple of minutes. Nice riding Kirk!
Before leaving Discovery Park, several Bicycle Planet riders joined us on the ride back to Karen’s and helped push the pace up to about 24 MPH! We ended up with about 12 or so in the group and soon reached William B. Pond for our schedule return stop. But once again the group decided to push onto Karen’s without stopping.
The pace picked up again just before the bridge and the group broke into two separate groups. A couple of us ended falling back a bit and lost sight of the faster group. We soon started to work together and just before reaching Sunrise we spotted the faster group again. Tim departed at Sunrise and I continued to push on to catch what I thought was the entire first group. Turns out they were Joel, Jeff and Phil by themselves riding at a slower pace. The four of us continued onto the Fish Hatchery then stopped for a water refill and to wait a bit for the others to catch up. After about 10 minutes we continued on back to Karen’s, taking the north side route around Lake Natoma.
Once back a Karen’s we found out later that Ryan had his second flat of the ride (the rear tire again!) during the return ride. All and all a very enjoyable ride with fantastic weather and good company
Next week, the Folsom Lake Loop which promises to be quite a challenge for the Peloton riders.