And so the Race Season Begins for some CF Members

The spectrum of cycling talent within Cycle Folsom is pretty broad. Most of our Members range from “inspired cycling enthusiasts” to “performance-oriented cycling devotees.” Over the years, Cycle Folsom has seen many of its members make the move to the amateur racing circuit, too.

The early race season has begun and I just received a couple of enthusiastic e-mails from ride leader Brian Acord, and Cycle Folsom founder Steve Ward. I enjoyed the write-ups and found them inspirational, so I thought I would share them with you. If you’re a member of our Meetup Group or our monthly New & Info e-mail, you may also be familiar with Steve’s posts to our forum and articles about his training efforts, nutrition/weight loss strategy, and performance testing at AthletiCamps.

You’ll also find a new “Race Reports Forum” on our Meetup site. Any of you Members who are racers are encouraged to post your experiences and comments there. We all would welcome the inspiration and/or entertainment that your post might generate.

Do I get extra credit points for racing in the CF colors, or a cool sponsorship deal? Folsom Bike hasn’t received their new kits, so I’ve been flying the red, black, and white (don’t tell anyone).

Today was the first road race of the season. Jeremy Barns, Jeff T, and I all raced in the same group (35+ Cat 5). I think Jeremy was the strongest rider today; he took monster pulls going up Del Puerto Canyon (the pace wasn’t fast enough for him). The top of the climb hits 18% near the top, with the last couple of miles all above 10%. Jeremy was over the top first with a big gap, then followed by a group of 4 with Jeff T in it. They gapped me on the climb and I couldn’t catch back on on the descent. Just too much wind. I ended up in no-mans land and couldn’t see riders way down the road in front of me nor behind me; I was left out in the wind. Jeff’s group caught Jeremy. Jeremy took second with Jeff T taking 3rd (good for Bicycles Plus). After riding about 10 miles out in the wind alone, I finally got caught by a small group of 4 which was a relief. Finally someone to draft off of! I took the sprint out of that group and rolled across in 6th out 21 racers. Not bad for a first race. Beat a Victory Velo/Hammerin Wheels (Auburn) rider and a Body Concepts (Folsom) rider out that group.

I’ll have my agent give you a call to work out the new contract and sponsorship deal.

(37 riders in our field; just one team mate in this race: Tim Zsoka)

Tim’s training has been derailed over the past few weeks, so he showed up to the race claiming he had “pack-fill” legs. With just the two of representing BP Sierra Nevada in our category, there wasn’t too much we could do in terms of strategy.

The early pace was slow, so Tim decided to go to the front and up the pace a bit, giving me a friendly wheel to follow; it allowed my to ride in second position without having to stick my nose into the wind.

In this sequence of pictures below, Tim is riding on the front (your left) of the field, and I’m just on his wheel (it almost looks as if we’re riding a tandem). In the second photo I magically disappear before reappearing front and center in the third photo. 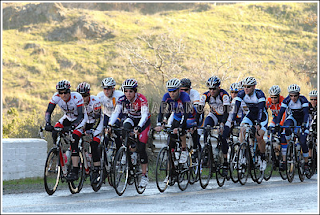 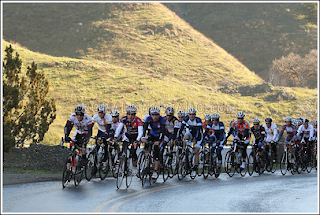 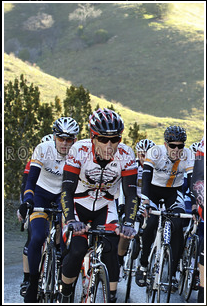 If you look closely at the second photo again, you can actually see the red stripe of my jersey sleeve between Tim’s right arm and his chest. Talk about cheating the wind, drafting expertly, and saving energy; this is how to do it. How well does it work when you do it well? After riding Tim’s wheel for 20 miles on a 2-3% uphill grade, I arrived at the base of the decisive climb with an average heart rate of 118 bpm.

Having an awesome team mate like Tim made it possible for me to mix it up with skinny little mountain goats who attacked the field on the 1.4 mile 9.7% average grade climb (that’s almost a full percentage steeper than Prospectors Grade). The higher up this climb, the steeper it got, peaking at 19%

Turning the cone at the top of the climb to start the 20 mile screaming mimi ride back to the finish line looked like this:

3 riders in the lead group 6 riders, more or less, rounding together about +5 seconds 1 solo rider rounding about +10 seconds Then me, rounding alone about +13 seconds – no one else even close enough to put a clock on.

I rounded and stomped the pedals, expecting to gain time on the riders ahead of me on the steep, twisty descent. The solo rider ahead got a quick launch and passed another rider who had been dropped from an earlier field.

On a rapid descent, I encountered the dropped rider next, but he was panicky and freaked out when shouted out I was coming on his left. He started swerving, almost uncontrollably and squealing that “it’s not safe!”. I had to back off, let him calm down then ask him nicely to ride on one side of the lane or the other…he just panicked again.

So I decided I would just have to suck it up, wait until we bottomed-out on the descent and then hope I had the legs to get back up to chase group 1. If not, there would be no top 10 finish for me.

With all of that pent up frustration, when I finally got around him, I drilled it. I looked up the road and estimated 200 meters to the solo guy, and another 200 (400 total) to Chase 1. Man, that was going to hurt.

I closed the 400 meter almost twice as fast as the solo guy, because we both caught Chase 1 at almost the same moment – about 4 minutes of V02 Max effort to get it done.

We were both gassed and sat out two rotations each while the other six riders worked the business end of the paceline. I jumped into the ro
tation and found out quickly that me and one other guy were all of the hard work. He and I worked in a 3 man rotation after that (him & I, along one of the other six, they would rotate one guy through every six).

After about 3 miles we blew two of our eight off the back, after about 5 miles it was mostly just the one guy and I doing all of the work. With 10 miles to go (we averaged 28 mph over the final 20 miles), I dropped to the back for a few minutes to jam down some Endurolytes, Anti-Fatigue Caps, Race Cap Supremes and Perpetuem. I followed that up with half a bottle of water and got back to the front to help drive the pace again.

We were closing ground on the three leaders, but not fast enough, maybe 5 seconds per mile, we weren’t going to catch them unless they bonked…not likely.

With 3 miles to go I had a caffeinated GU and some more water. With 1k to go I moved to the back of the bus again where I could watch everyone. They all looked gassed: shoulders heaving, pedaling squares, hands on hoods, steering esses…all the tell-tale signs – everyone that is but the other strong guy, he had a poker face on, I couldn’t get a read on him so I marked him as a definite threat.

With 500 meters to go, I could see a string of dropped riders from a previous field suffering in a single file line on the right side of the road; and with the centerline rule in effect, that meant they would become a limiting factor in our finishing sprint. I decided I could use that to my advantage when the time came.

With 350 meters to go on this uphill finishing section, I launched the best attack I could muster, coming from last wheel and blowing right by the other five guys about 30 meters before coming up on the line of riders struggling up the right side. That effectively closed down any attacks from the right side, I only had to defend one side. I must have caught them all by surprise; I think with the up hill finish no one wanted to go too early. My guess is they were all waiting until about 200 meters. I waited that long, I would have gotten boxed out.

I had such a good launch that I was riding away to easily capture 4th place, I was spinning 100+ rpms, so I shifted for good measure to keep increasing my speed and not take any chances. Ooops, blew the shift! I scrambled, shifted quickly and reengaged the chain. Only now my cadence was down to about 70 rpms and I had to re-accelerate.

While struggling through all of this maneuvering, I faded to the left side of the lane and opened up a space on my right side. Wouldn’t you know it, a wheel appears out of my peripheral vision on my right hip. Now I had my rpms back up to 80 and was rapidly accelerating again. That wheel stalled out and then started to fall back again. I kept kicking and was lucky to keep my position and finish 4th (by about a bike length).

Great race, lots of fun, and a good test for evaluating my early season fitness. I’m still doing base training (I’m in my Base 3 period), so I haven’t been doing any threshold or Vo2 Max efforts, just SE, LE, ME and SFR. Placing well and not too far behind the leaders is promising and gives me hope that I might become competitive later in the year when I get to the end of my Build and Race periods.

Also, most of the credit goes to Tim. He put in almost 20 miles on the front to keep my front wheel protected from other riders, and my nose out of the wind. Getting me to the base of the climb on second wheel with an average heart rate of just 118 bpm put me in a superior position to get a good result. And after a team mate puts in a dig like that for you, you feel a very heavy sense of obligation to do your very best to place well so that he will feel his efforts contributed to the teams success.